Somewhere in the 8 th century CE, the story goes, about 70 local families grown weary of constant pirate raids, climbed the forbidding mountains and built their stronghold on a steep slope. In this way, Olympos, perched on its ridge like a fortified eagle’s nest, was founded; a vibrant, isolated community, that developed customs distinct from other villages on the island. And although the population has greatly diminished since its peak of around 3000, and it no longer takes four hours to walk to the nearest village, those that remain hold tight to their history and traditions. Olympos’ unique religious festivals and hardy, folk-attired women have cemented the village’s reputation as one of the Dodecanese’s most traditional communities throughout Greece and the world. But for how much longer? 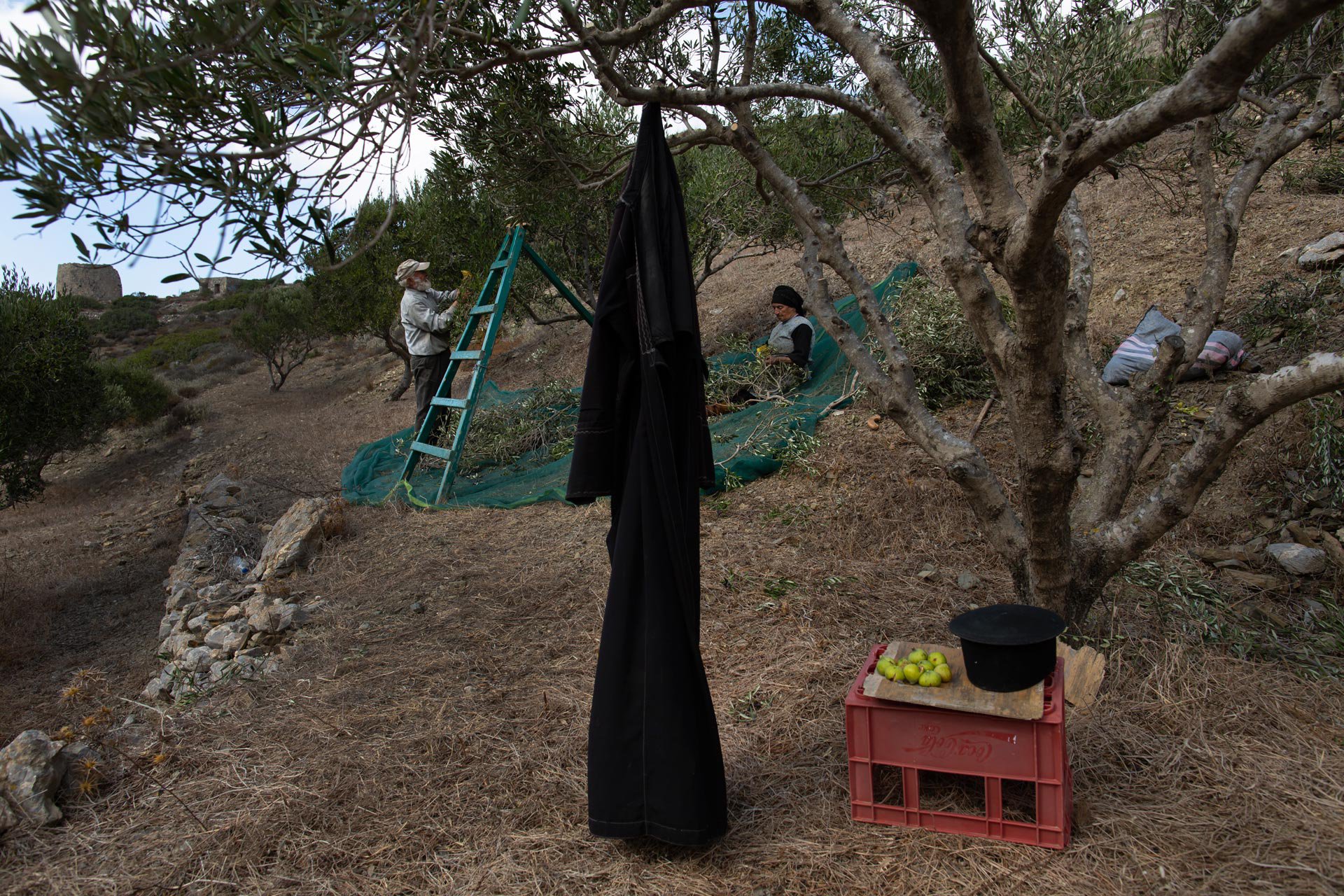 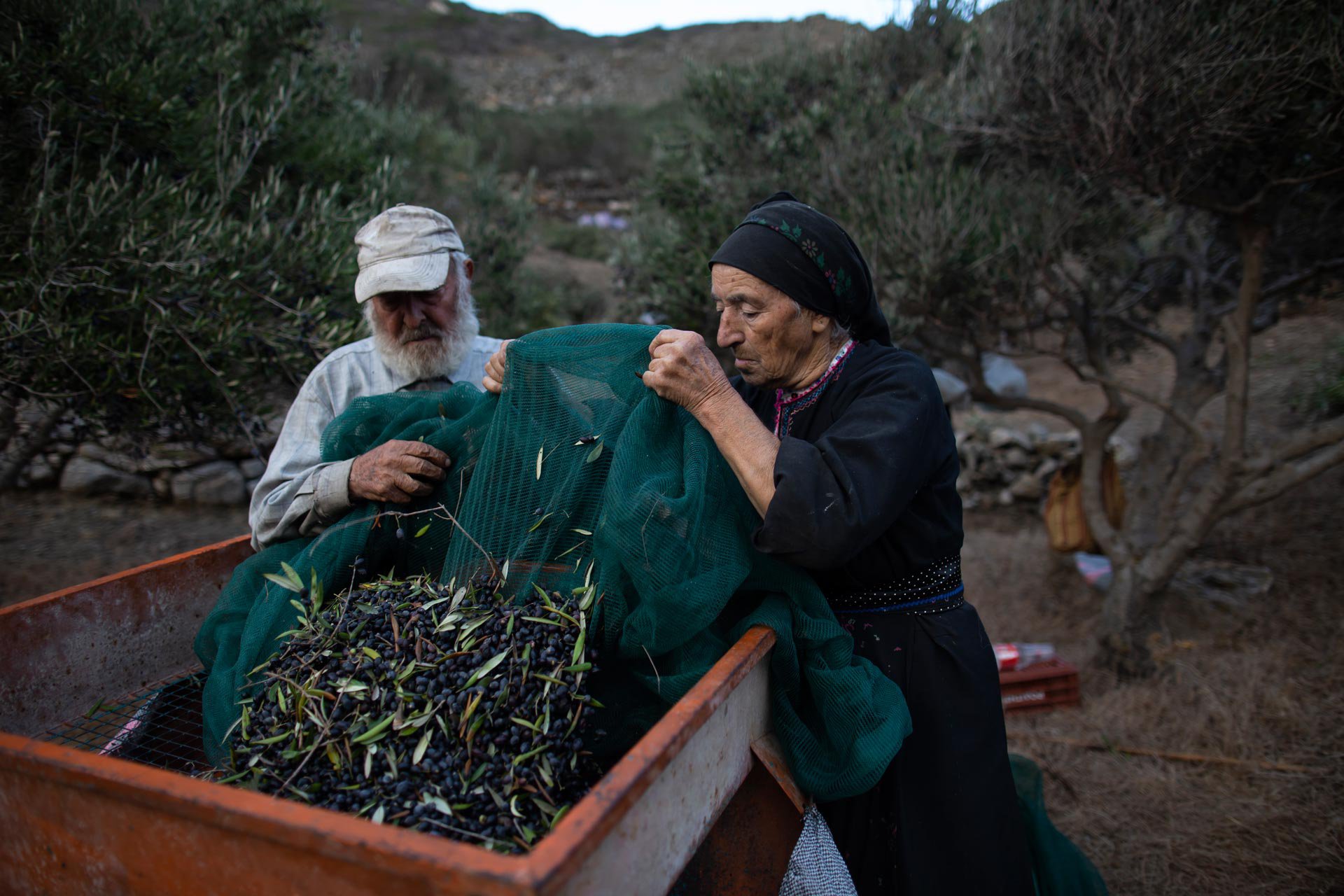 At almost 80, Irini Diakogeorgiou, the village priest’s wife, has known no other life than Olympos. She grew up in the hard years, during World War II and observed her parents and relatives toiling in their plots from sunup to sundown. Sometimes, they would be gone from home for a week, sleeping near the fields to dig and plant and thresh the crops. Today, standing in her ancestral olive grove and wearing a smock over her black folk attire, she and her husband, Father Yiannis, lay out the special cloth used for gathering olives. As they work, Father Yiannis sings. He believes the trees listen to him and thrive on his song. His wife says he treats his trees with the same tenderness as he does his family. The possession of olive trees is extremely important to families on Olympos, even today. “When a home has bread and olive oil, they can survive even if they have nothing else,” says Irini, as she shakes the fruit free from their trees.

Keeping the family fortune intact was of paramount importance to Olympians, and so a unique custom of primogeniture developed that holds to this day. Custom states that a couple’s first-born daughter – called the ‘kanakaria’ - inherits the entirety of her mother’s dowry, and the first-born son – the ‘kanakaris’ - inherits his father’s estate. The rest of the family’s children would have to make their own way in the world. As the reverend recalls, they had only two choices: get by as they could in the village, “if they could” – or emigrate. For this reason, many Olympians left for Crete, Samos, and Asia Minor, where they mostly worked in construction, with some becoming adept at stonemasonry and others doing any odd job that they could.

Olympos has fallen silent. Only about 70 villagers, most of them elderly, still live here year-round. The rest of the homes are boarded up, with only a few lucky enough to be aired out for a few weeks in the summer. The largest village on the island has been hemorrhaging its people for decades - today, only two children attend the elementary school. “You walk from here to the other end of the village where the supermarket is, and there’s not a soul to greet on your way,” says Irini dejectedly. “We’ve become used to it, and live with it. What else can we do? The people are gone, there’s nothing left.”

There were few ways to make a decent living on Karpathos for islanders without land. Those Olympians, the builders, the shepherds, the ones who had no land of their own to farm, they were the first to abandon their homeland in search of a better life. “The ones who had no fate; and fate means vineyards and fields,” says Father Yiannis. “Those who had no fate in these lands, they left first.” The last to go were the farmers. But eventually, they, too scattered, to Germany, the U.S., Canada, Australia. 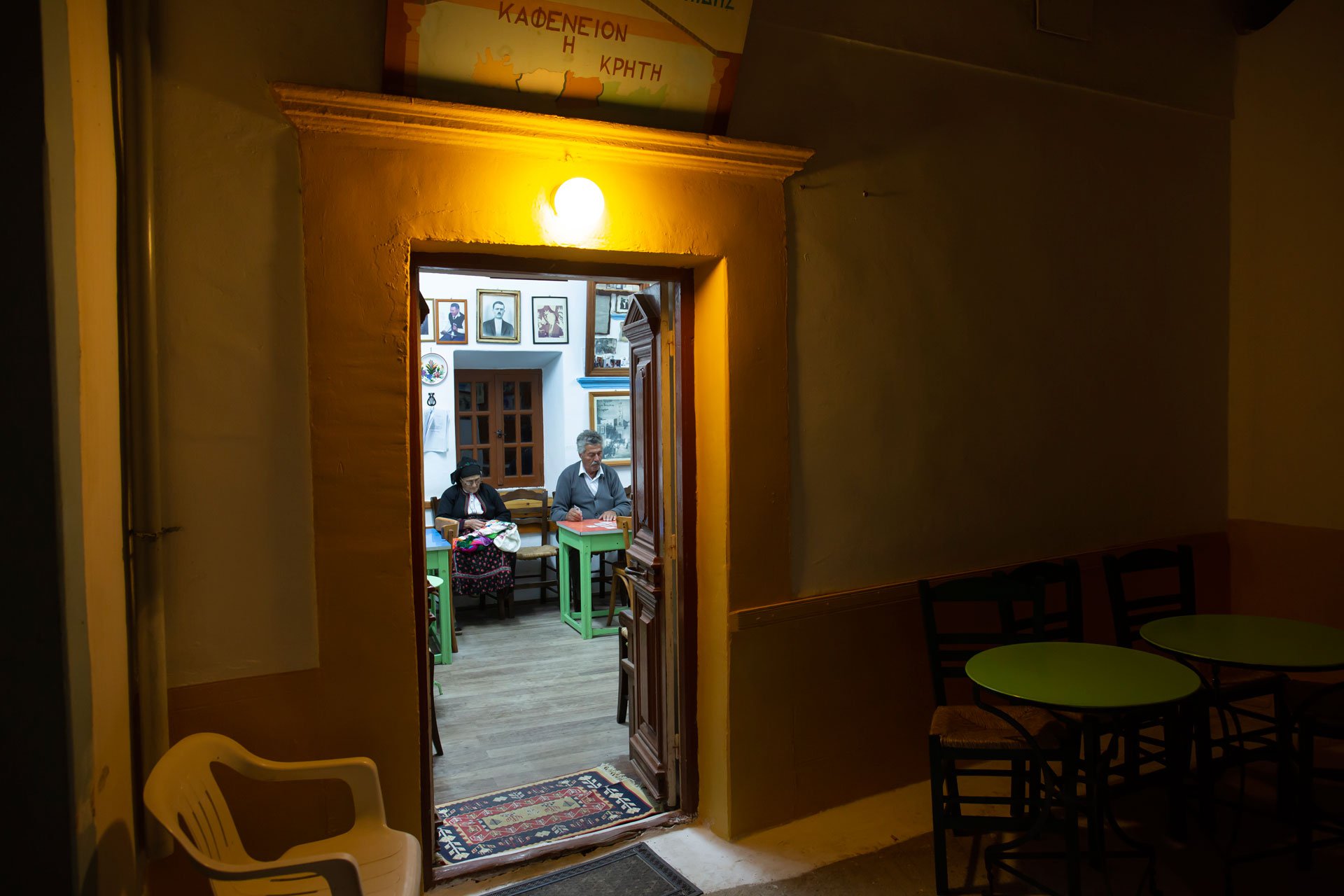 Farming on the island all but stopped. “A time came when with one day’s work, I could buy a sack of flour enough for my family to eat for a month. So why should I wear myself out on the mountain if I could earn the equivalent in two days? There’s no need to spend one’s entire life in the fields to feed your family anymore,” says the reverend. One by one, seeing how quickly their brethren grew rich, all the farmers of Olympos left, and their fields returned to nature. 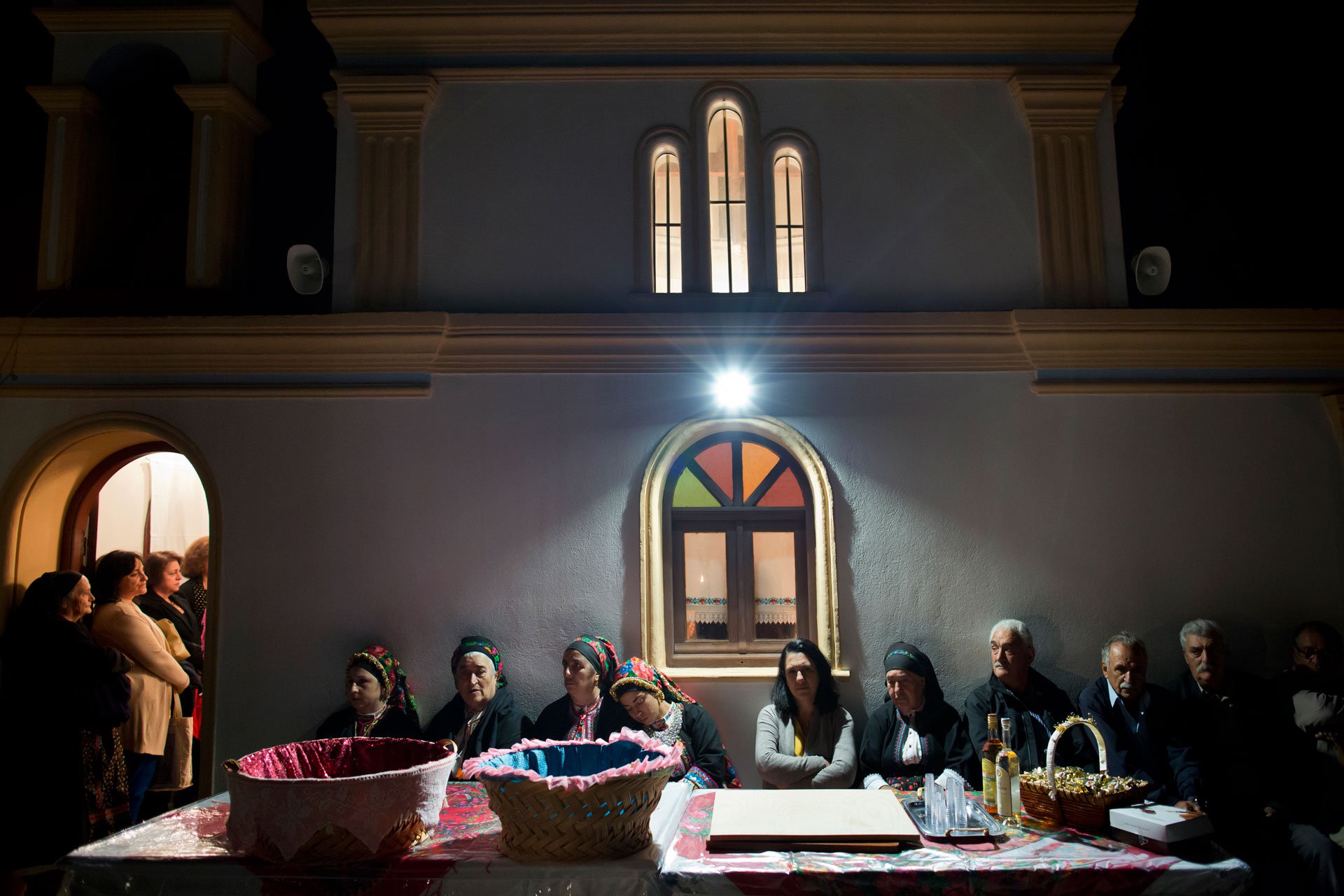 “It was so wonderful back then,” recalls Irini. “There were so many us of taking part in our festivals and feasts - and what feasts they were!” And while the traditions continue unchanged, carried out in the same way for hundreds of years, fewer and fewer people remain that know them. Every family in the village has its own chapel, each dedicated to a specific saint. In the old days, when the saint’s feast day came around, the family who owned the chapel would host a mass for their fellow villagers, with food and drink and song following.

But with the population continuously dwindling, the feasts that do take place only serve to remind Olympians of what once was. The bustling weddings and dances of the past are long gone, and residents fear their customs will soon be extinguished for good. “Well, the people left,” says Irini. “People are the ones who make the customs and festivals.” 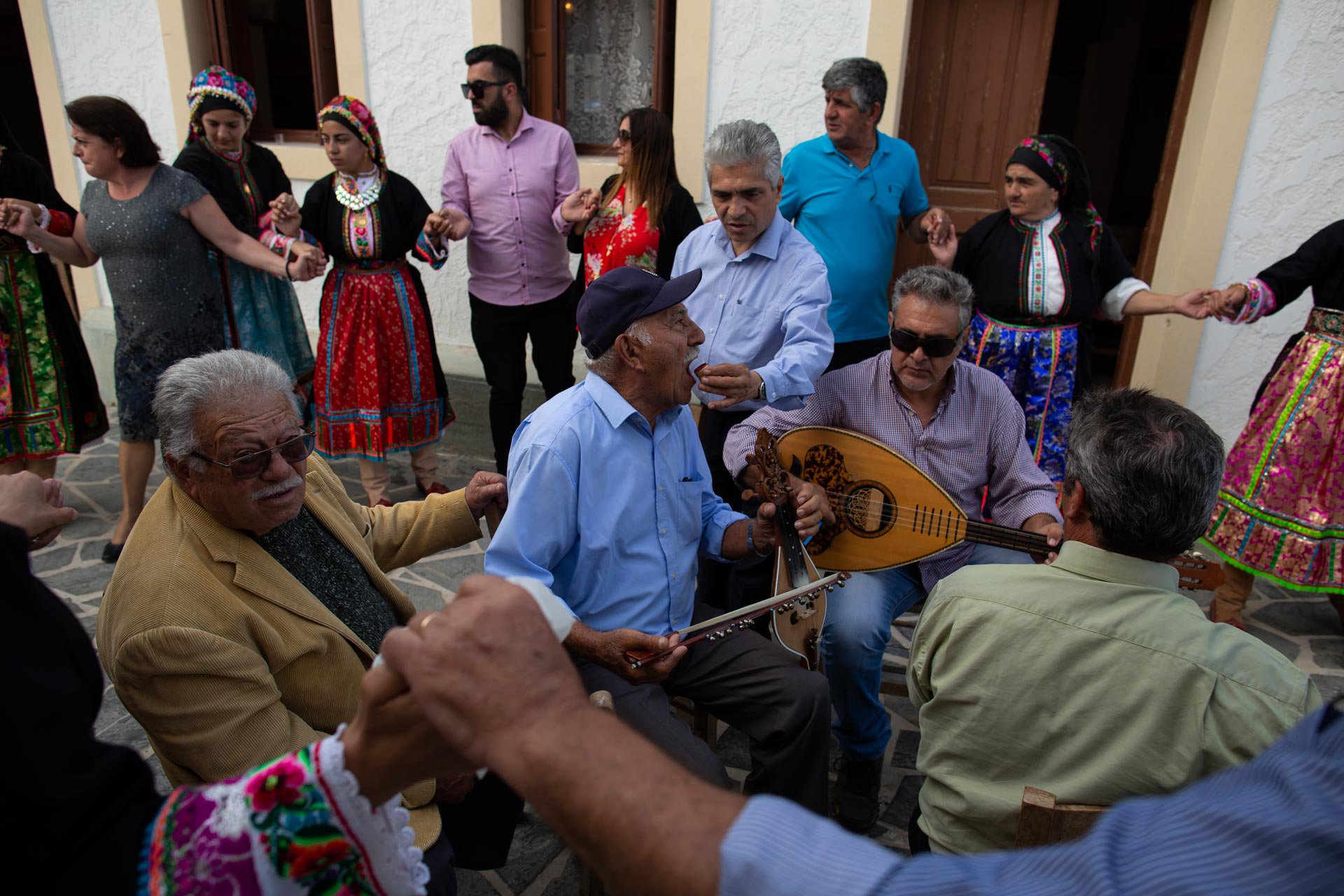 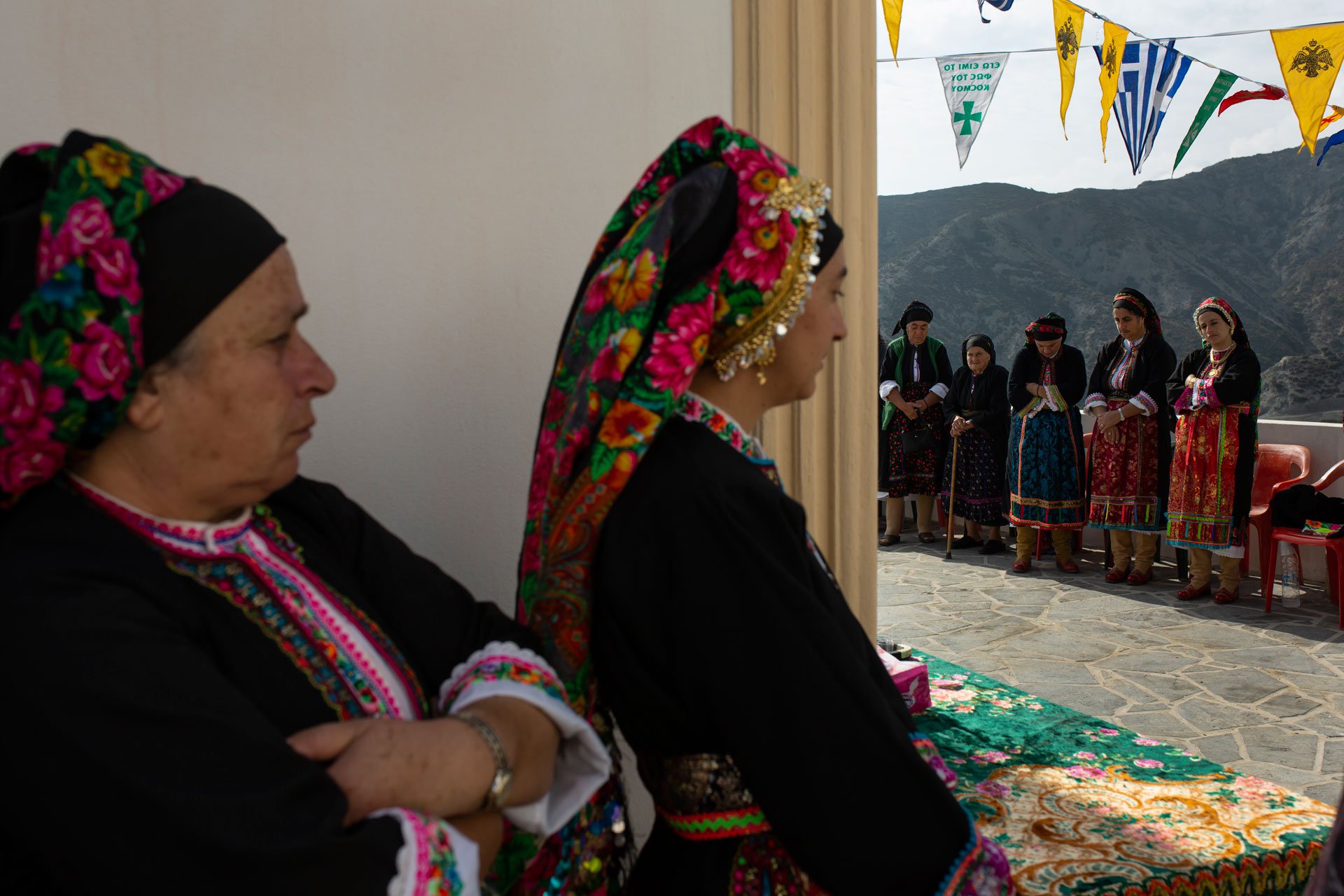 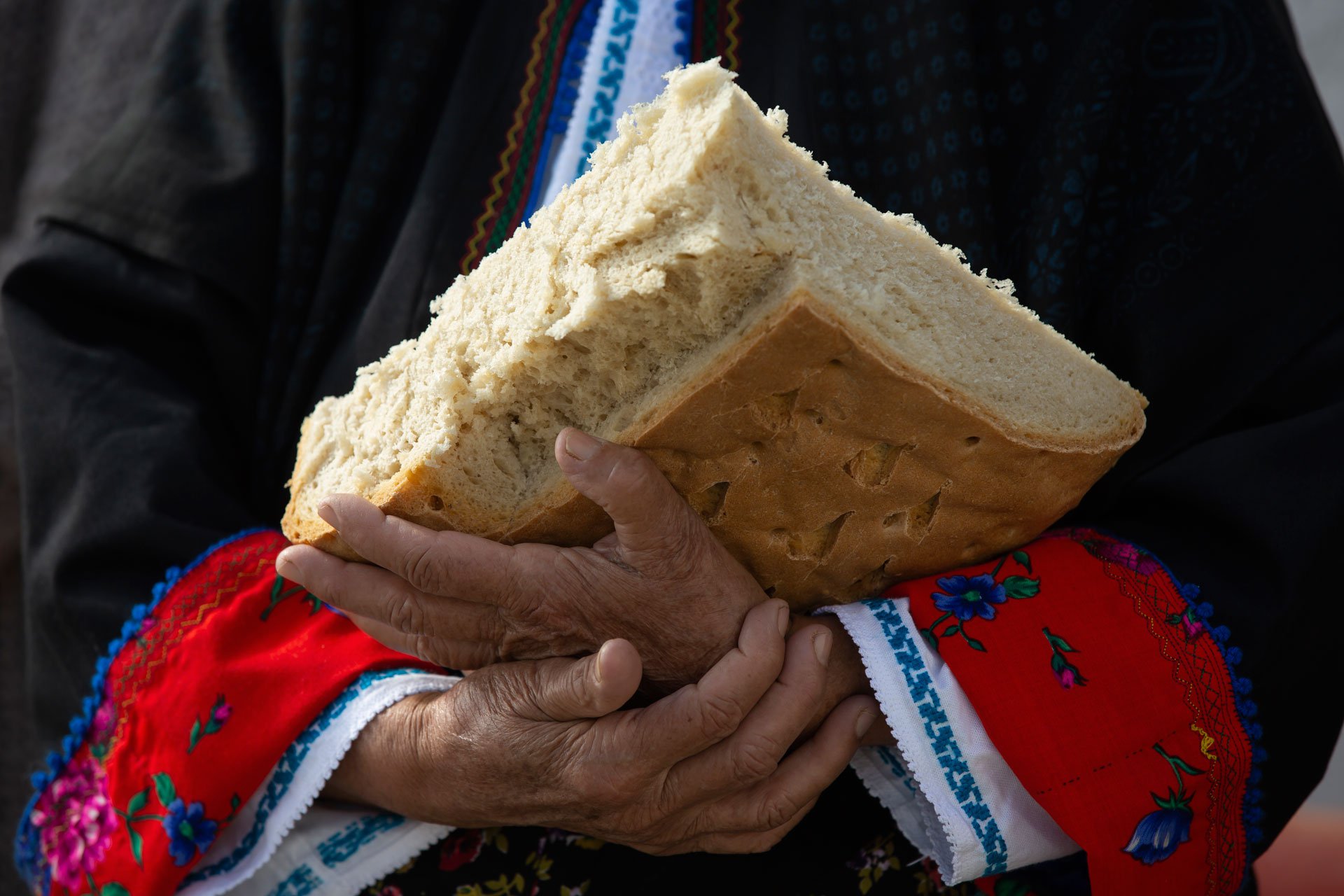 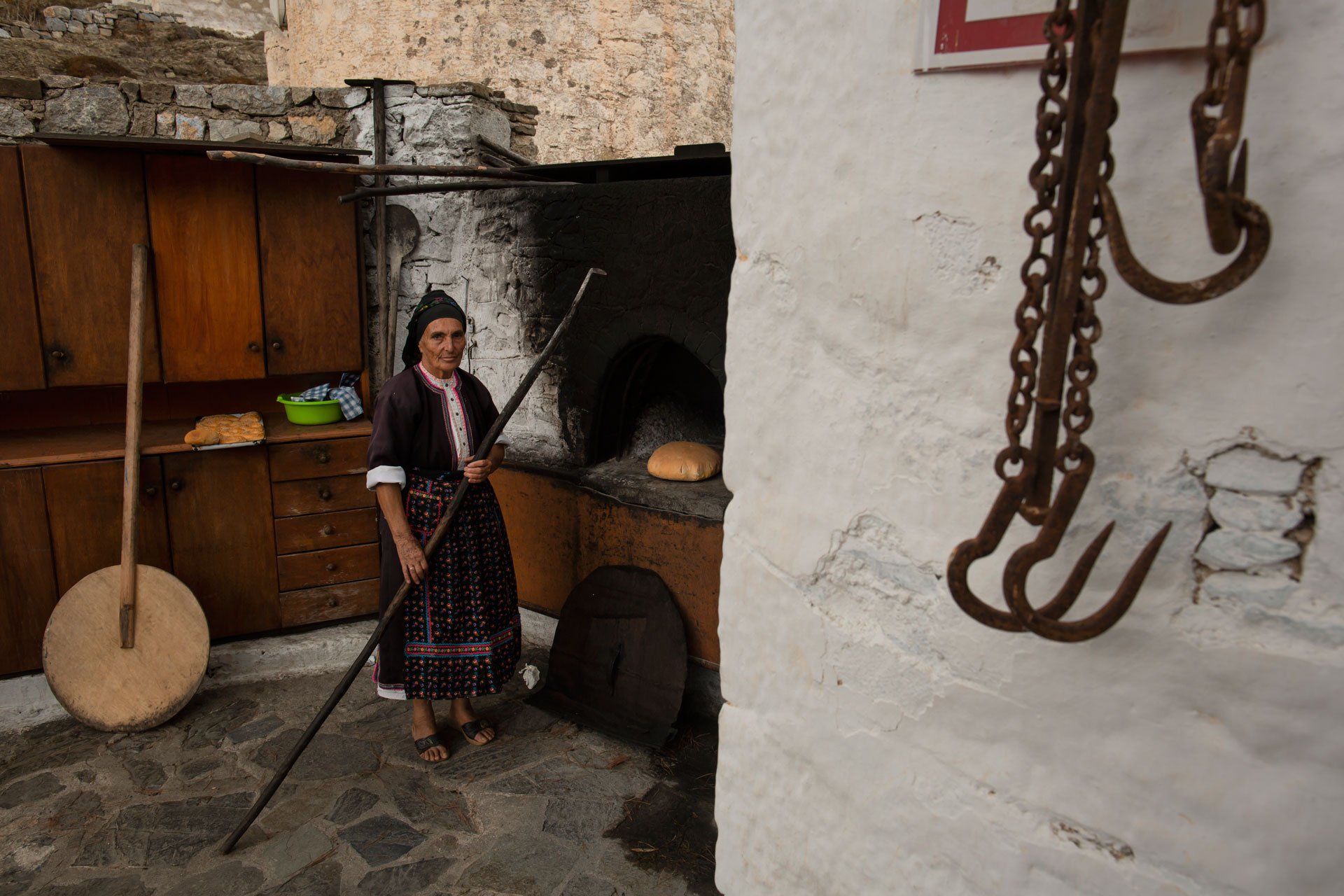 Sophia Farmakidou carefully folds up the sleeves of her hand-embroidered ‘kavai’ and adjusts her flowery headscarf before she starts kneading the dough. The Karpathian ‘kavai’ is a long-sleeved, black garment that is worn by he women of Olympos over a white tunic. A colorful belt and apron, along with red leather boots complete the outfit. For the last 74 years, Sophia has worn no other clothes but these, the traditional folk outfit which she weaves on her loom. And she’s no outlier; most women of Olympos still dress this way, even when they no longer live on the island.

Sophia’s mother may have spent the last 50 years living in the U.S., but continues to sport her kavai’ and boots on the streets of New York. Sophia learned the art of baking in a wood-fired oven from her mother. “The women would come up to the village from the fields on Fridays, bake all day on Saturday, and then leave again on Sunday, to go back to the fields,” says Sofia. The bread would last the family all week. And come Friday, the cycle would be repeated. "That was just the way we lived,” Sophia explains. 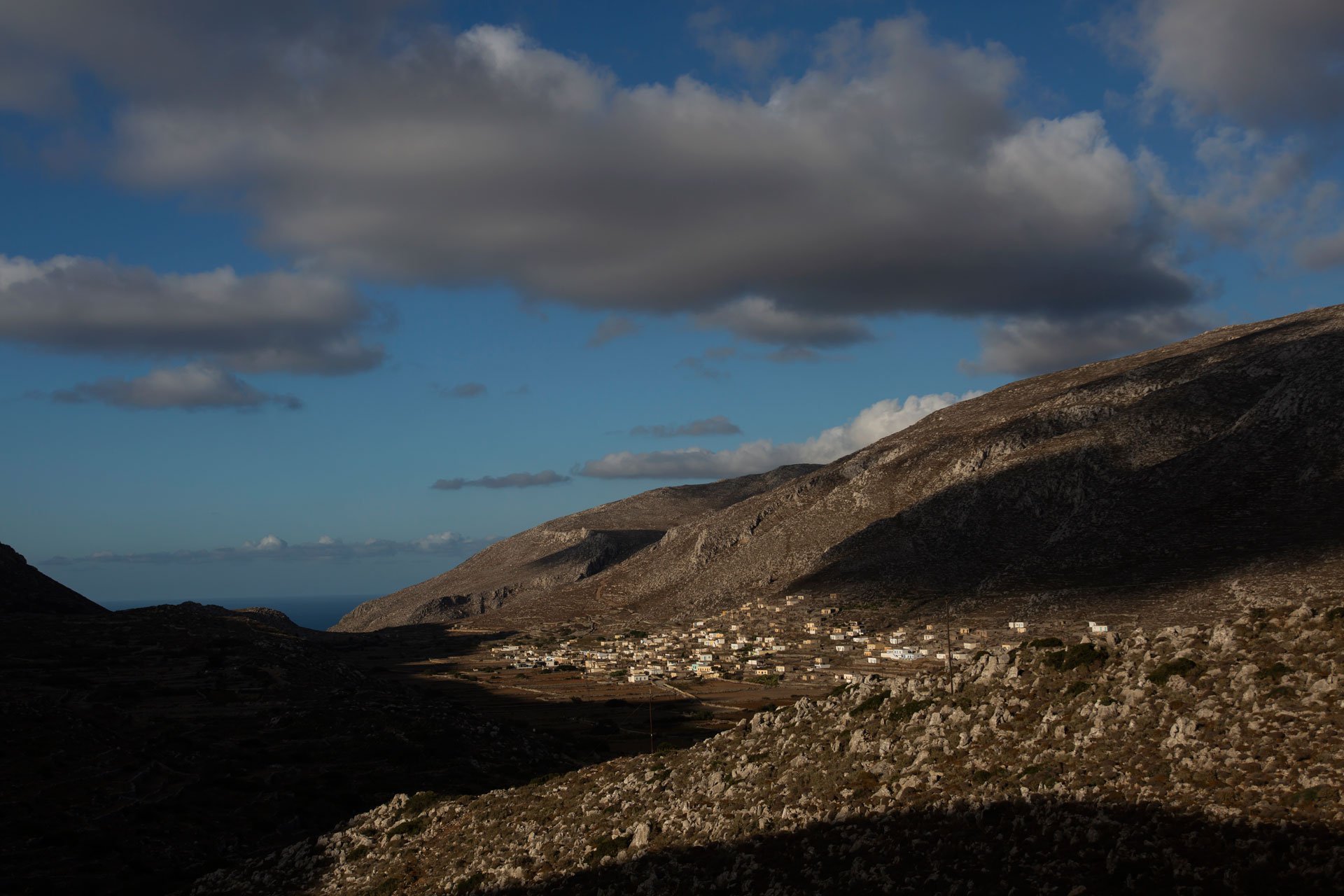 The fertile valley where the women of Olympos toiled while most of their menfolk worked abroad, are about six kilometers downhill from Olympos, near the sea. Locals call the area Avlona, a name coined from the Greek words for stable and thresher. Dozens of small, squat barns used for keeping animals are arrayed on the hills around the flat, grassy fields. Nowadays, some of these former barns serve as simple holiday homes for expat Karpathians. Often, the barns would also have a separate room for humans to sleep, so they didn’t have to trek back up to the village during the harsh winter planting season. Come May, families would descend upon Avlona to harvest their vines, wheat, barley, lentils and vegetables. Today, Avlona has fewer than 10 residents, and most of its fields lie fallow. 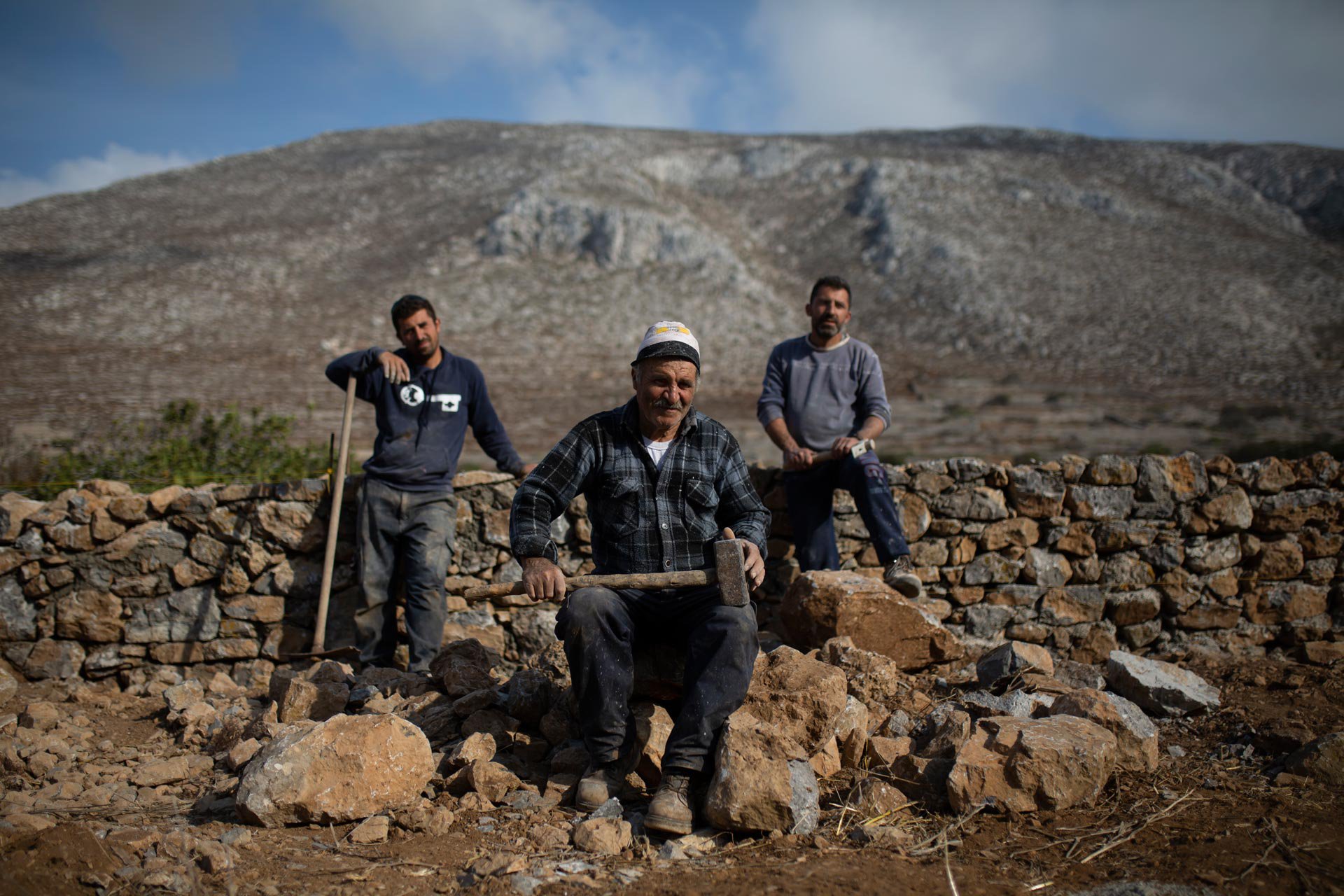 Michalis Lentakis and his wife Anna are two of the very few permanent residents of Avlona. The two of them, along with their four children, have been working nonstop every day of their lives. They tend their onions, wheat, grapes and other crops on small, scattered plots of land, keep animals, and run Avlona’s only taverna in summertime. In the winter, Michalis divides his time between farming and seasonal construction jobs. He’s often joined by his sons, Nikos and Giorgos; Nikos is a firefighter while Giorgos is a plumber, but the family collectively chase every job they can find. “If there’s a construction job that needs to be done, they know how to do it" Anna says.

Whenever someone calls them for work, they go, so they can have some money in their pocket.” 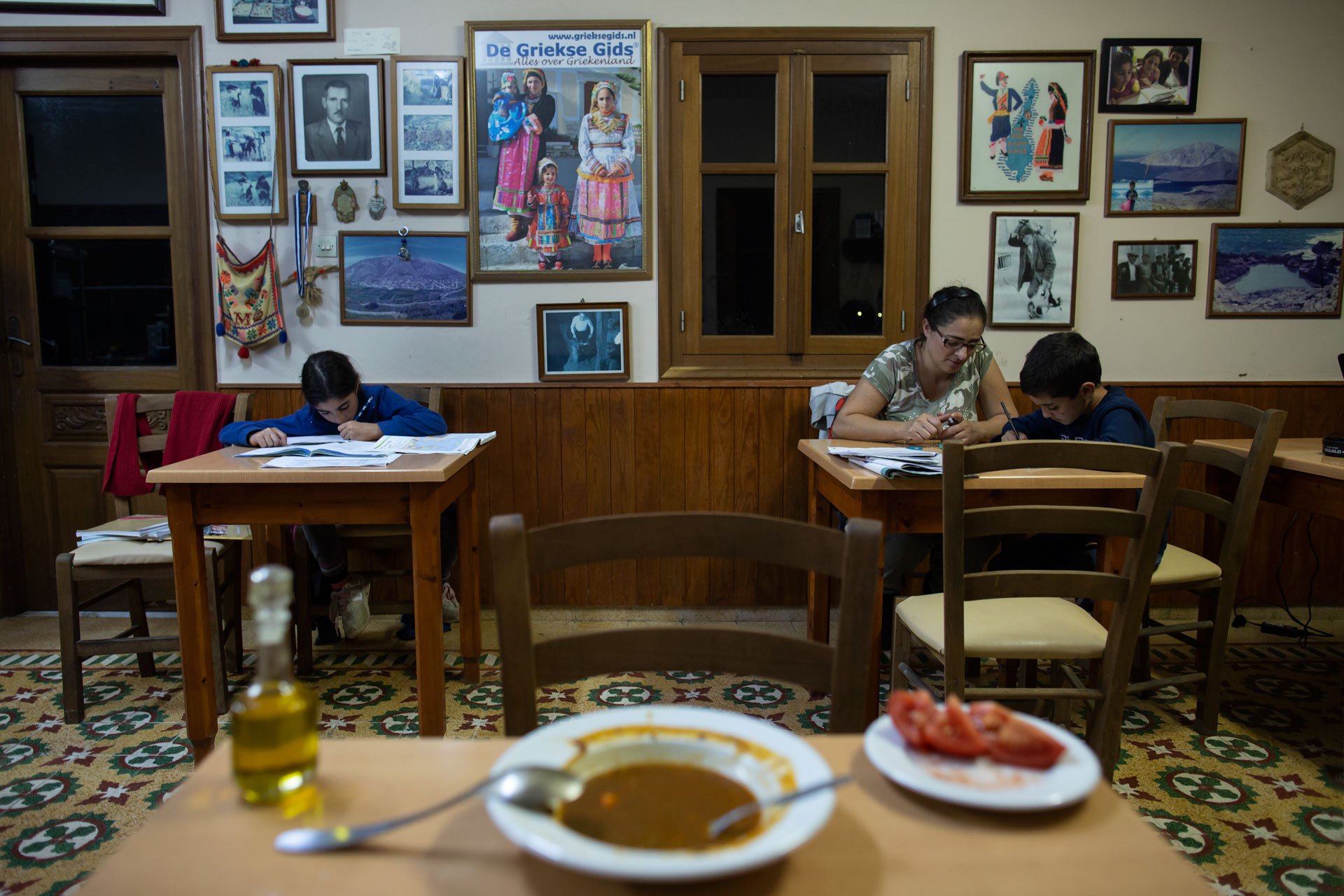 Anna and Michalis’ daughter, Marina Lentaki, runs her own taverna in Olympos proper. Famed for its hand-rolled pasta, tourists flock to it during summer. But in winter, dining tables turn into desks, and the cozy, wood-paneled eatery transforms into a study for her two children - the only two students at the elementary school. In their grandmother’s time, there were 250-300 children attending the same school. But little Anna, named for her grandmother, will graduate this year, leaving her little brother, Vassilis, to attend fifth grade by himself, with no other child, of any age, to play with at recess. 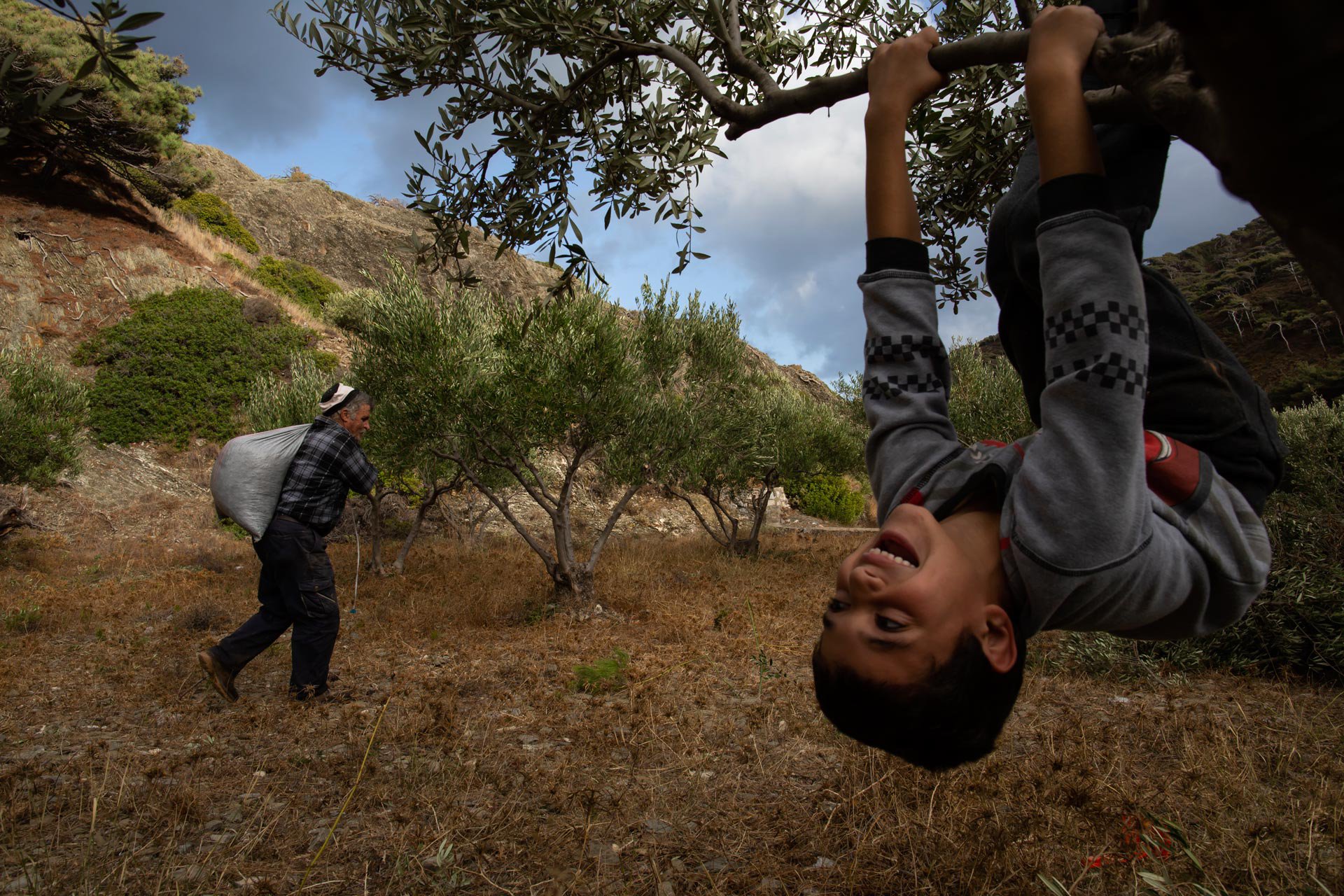 “When they hear about how many children used to live in the village, and now it’s down to them two,” says their grandmother, “they feel discouraged.” Little Anna and Vassilis have no interactions with children of their own age, and their free time is spent helping their grandparents in the fields and the family taverns. 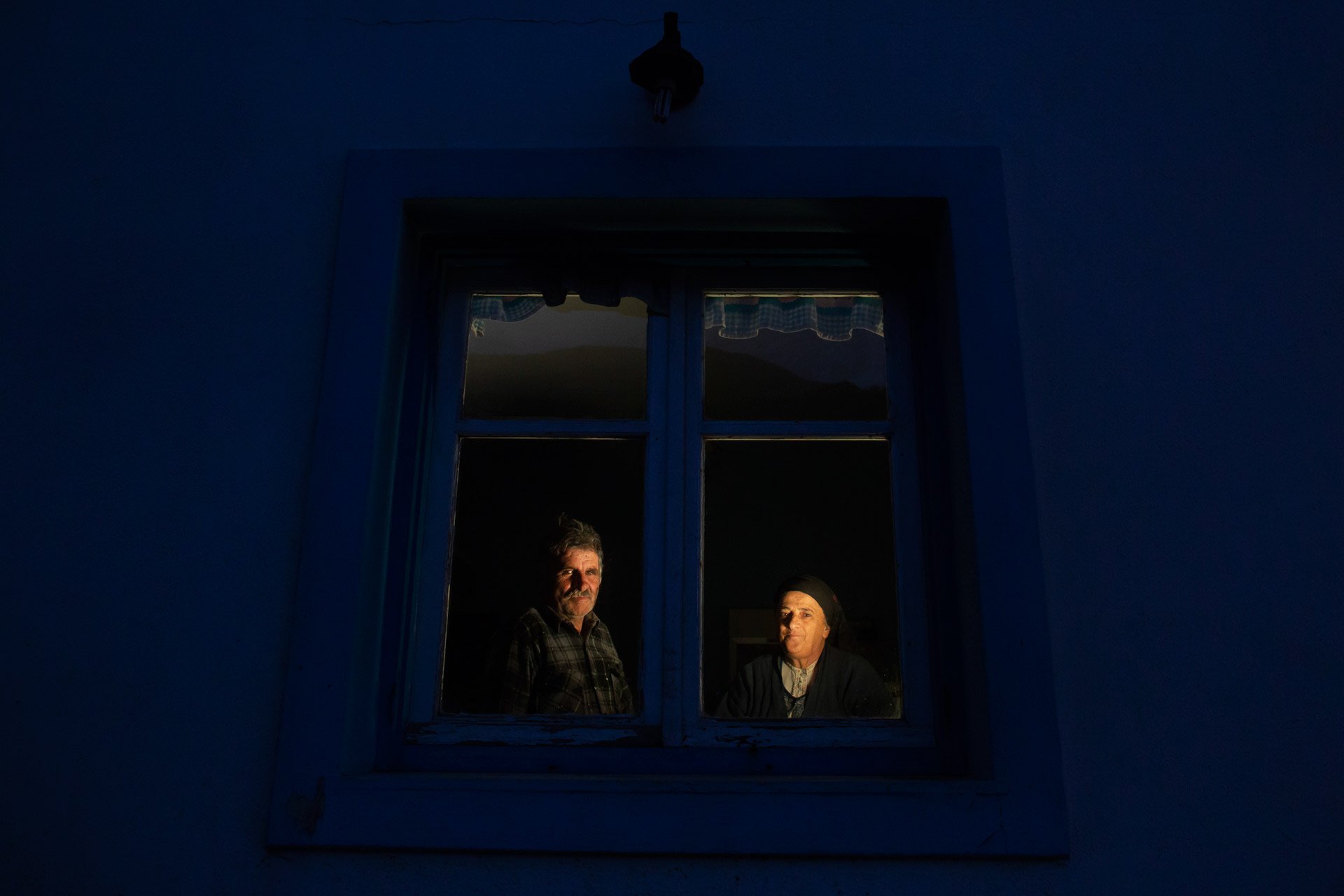 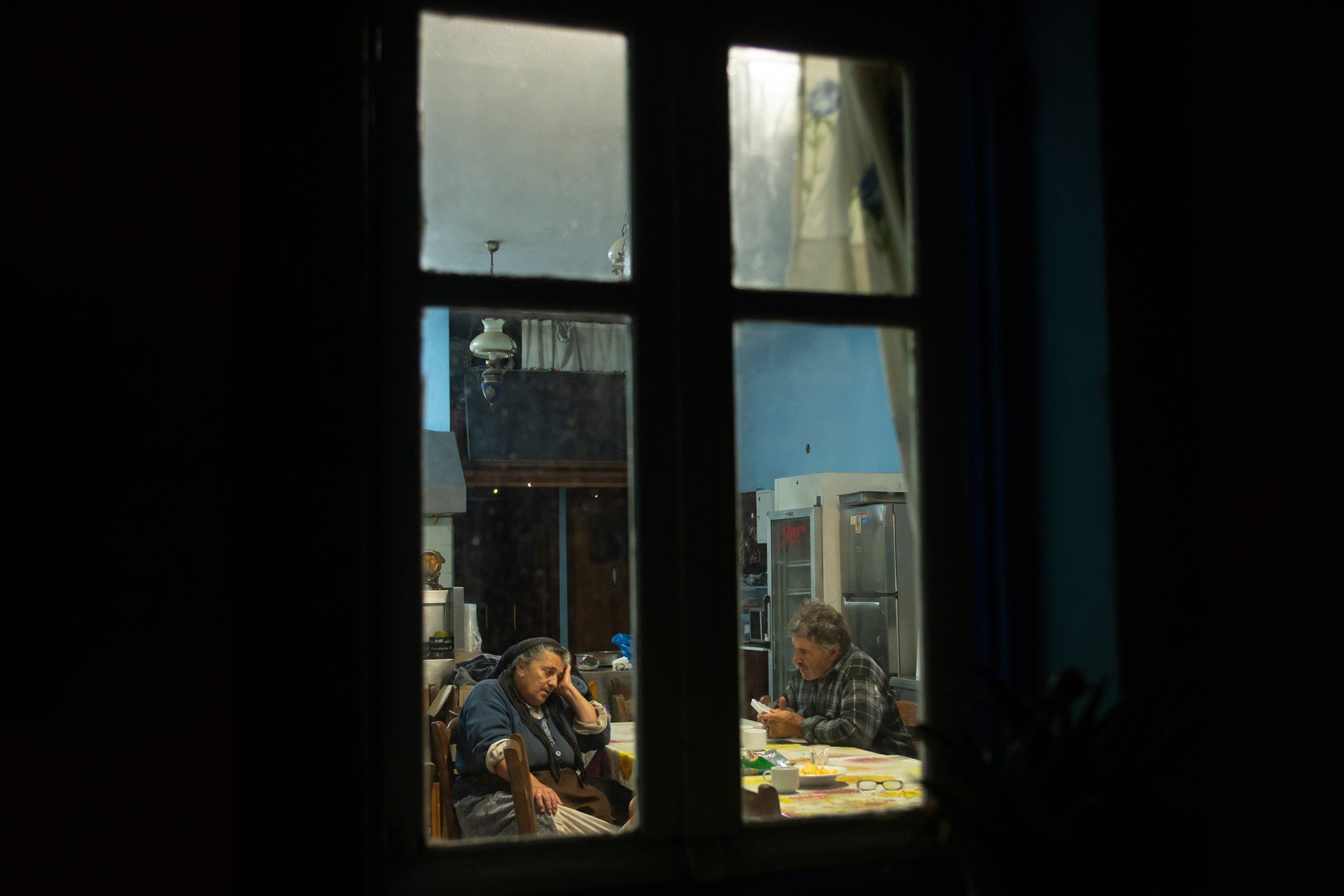 During winter, life in Olympos is not only lonely, it can also be dangerous. “There are times when there is no doctor,” says Anna Lentaki. “When one doctor finishes their rotation, it can take some days for another to come. Sometimes we’ve been without a doctor for a month.” If they need a doctor, they have to drive one hour to the capital, Pigadia. But often, the only road out of the village is blocked by falling rocks in the winter, leaving them trapped, with even the ambulance unable to approach. When Michalis had a heart attack, their neighbor

– who had just watched a television show about first aid training –helped keep his heart going until he was helicoptered to Athens. “We live underneath the sky, under God,” says Michalis. “When God wishes it, we live. When he doesn’t…” For Olympos residents, faith plays the decisive factor in their salvation or demise. To them, saints are something akin to doctors. “If we have an ache or some problem, we’ll light the candle and attend to the saint’s shrine,” says Anna. “First we’ll pray to our saint and only then will we get into the ambulance.” 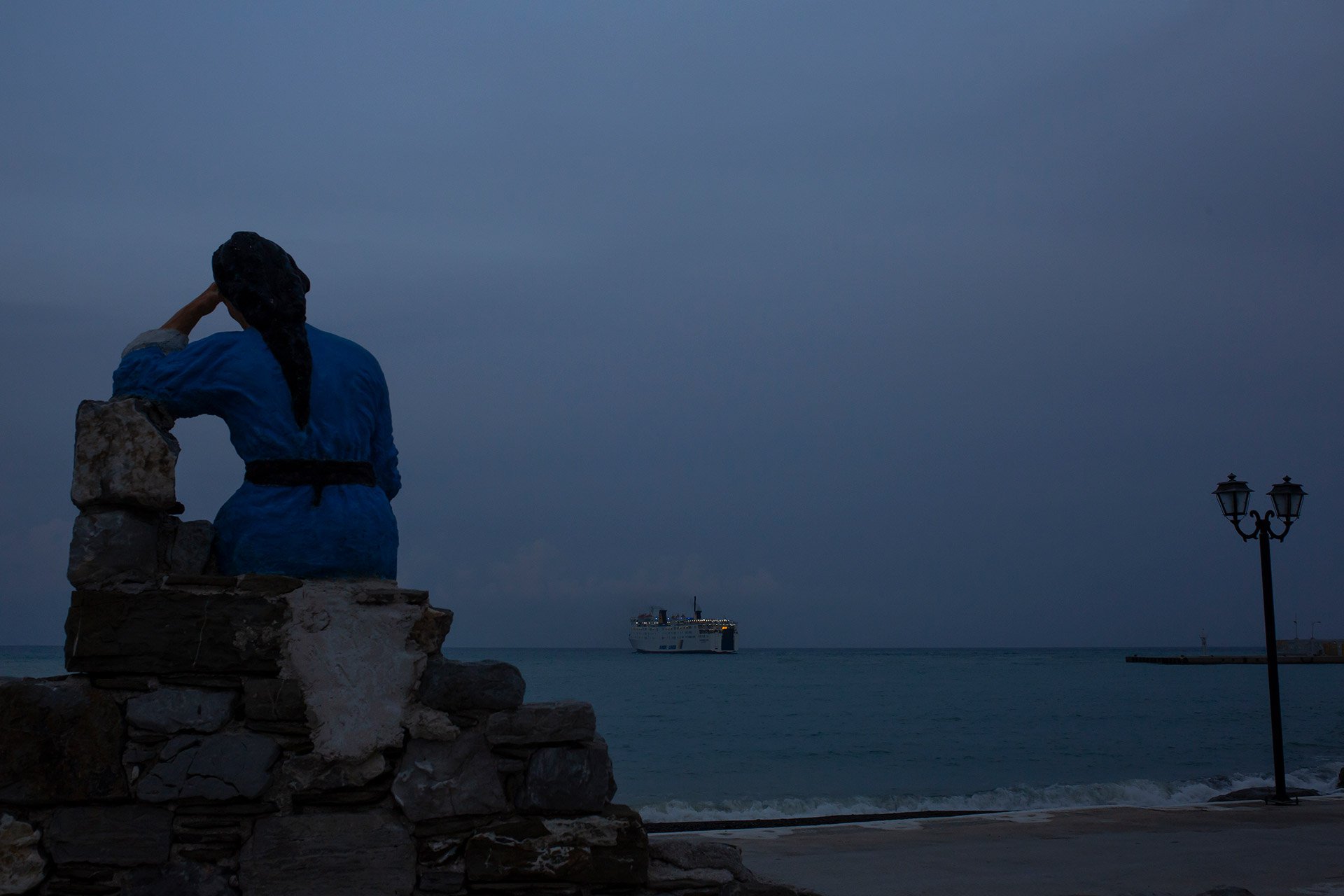 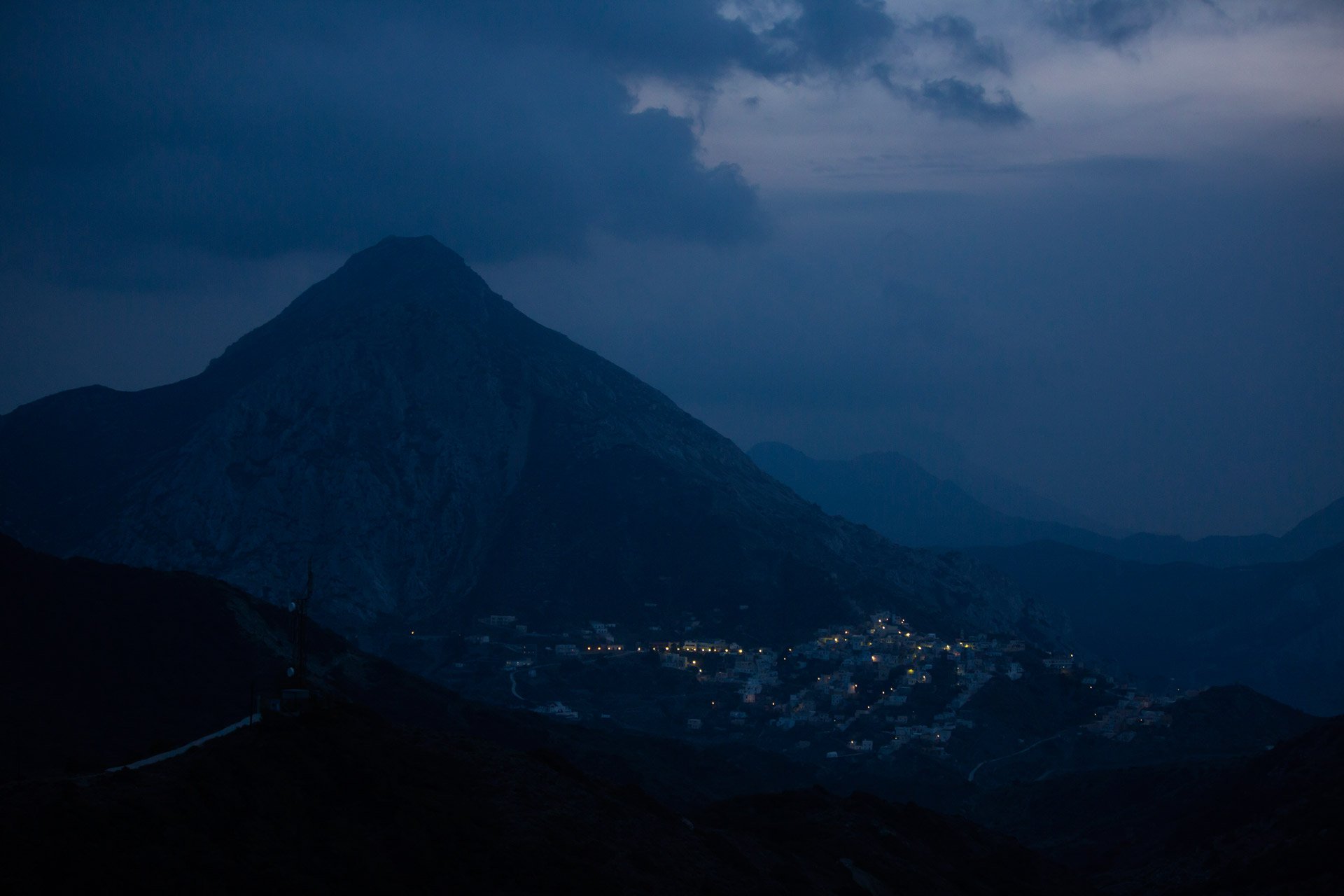